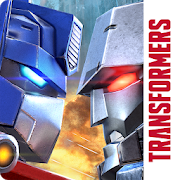 Join millions of players in the battle for Earth! Side with the Autobots or Decepticons and assemble the ultimate team of Transformers using Combiners, Triple Changers and Beast Wars characters.
COLLECT OVER 100 CHARACTERS
Construct the Space Bridge to summon classic heroes Optimus Prime, Grimlock and Bumblebee through to infamous villains Megatron, Starscream and Soundwave. Forge colossal Combiners including Devastator, Superion, Predaking, Bruticus and Volcanicus, the new Dinobot Combiner.
‘TIL ALL ARE ONE!
Form alliances with fellow Autobots or Decepticons from around the world. Demonstrate your power by competing in multiplayer events and planning with fellow allies.
UNLEASH YOUR ABILITIES
Each Transformers character is equipped with a unique ability. Change form to deploy stronger attacks and turn the tide of battle!
DEFEND YOUR HEADQUARTERS
Protect your Energon by building an impenetrable fortress with technology from Cybertron!