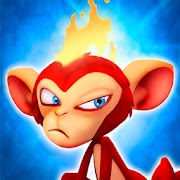 Lead your Monster Legends into arena battles in this fighting game. Breed, feed, and train Legendary and Epic monsters – even the brand new Mythics! Build your fighting force and face the ultimate challenge: real-time battles against other Monster Masters.

Collect monsters, choose different sets of skills, and boost your strategy in action-packed battles. Start by building a world for your monsters to live, fill it with habitats, and breed new species!

If you’re a true Monster Master, you’ll love fighting in Team Wars, where you’ll be able to join other players in the game and win magnificent rewards.

COLLECTION & BREEDING GAME – UNIQUE MONSTERS AWAIT
🔥 Collect over 700 monsters: New monsters are added to the game every week.
🔥 Breed monsters of different elements and rarities to create cool new species.
🔥 Obtain incredible monsters of all types in the game’s limited-time events.
🔥 Get ready to master the strongest rarity ever discovered, the new Mythic monsters.

RPG PROGRESSION & STRATEGY
🆙 Level up your monsters for the battles ahead and rank them up in the Monster Lab to break their limits.
🆙 Boost your monsters’ powers with Runes and equip them with valuable Relics to gain advantages in battle.
🆙 Set your monster teams combining attackers, tanks, and control monsters.

MULTIPLAYER REAL-TIME GAMES!
⚔️ In Live Duels, you don’t need to own monsters to create your dream team and duel against another Monster Master.
⚔️ Fight PvP battles in the Multiplayer Mode each season for trophies, rewards, and a chance to reach the Top Leagues.
⚔️ Join a team, build a strategy in the Team Chat, fight in Team Wars, and obtain exclusive monsters from the Team Shop.
⚔️ Challenge your teammates and friends in Friendly Live Battles, a real-time battle mode.

BUILD A MONSTER PARADISE!
🧰 Build a Monster Paradise with everything you need: A Breeding Mountain, Habitats, Temples, and more!
🧰 Unlock special buildings in the islands, like the Library, the Ultra Breeding Tree, the Temples of the Guardians, and the Monster Lab.